A live view of the City of Chicago instance of Audience Center, displaying distribution of train stations across the city on top of modeled hard to count scores by block group.

This just in: Census Intelligence Center received two honorable mentions in Fast Company's 2020 Innovation by Design Awards
Overview
Beginning in the summer of 2019, I led research and design on the scaling of the then minimally viable Civis Audience Center, a lightweight, configurable (read: templatized and flexible) data visualization tool that enables users to explore cleaned and modeled population data, define subpopulations, and target audiences for outreach and activation.
One of Audience Center's primary use cases for the first half of 2020 was as Census Intelligence Center (CIC). Since late 2019, CIC has fueled the Census efforts of more than 25 organizations comprised of cities, states, non-profits, and agencies.
The Highlights
From Q4 2019 to Q2 2020:
—> User growth: from less than 10 users to more than 200, from 1 active account to 12
—> Implemented designs to reduce internal costs to deliver new accounts, more than 2 weeks to less than 3 days
—> Used the Census use case to redesign and generalize Civis Audience Center, led to increased sales in commercial and political sectors
—> To date more than 90% promotors, via CIC user response to in-app NPS survey
My Role
At Civis, I work in a product squad alongside a technical lead, a product manager, and three engineers. Our squad is autonomous and I have led research and design on Audience Center since mid 2019. All of my design decisions are made in tandem with the product and technical support of my team members. That said, I was the sole designer for this project and unless otherwise stated, the work and thoughts displayed here are my own.
The Process
View my full design process in Figma 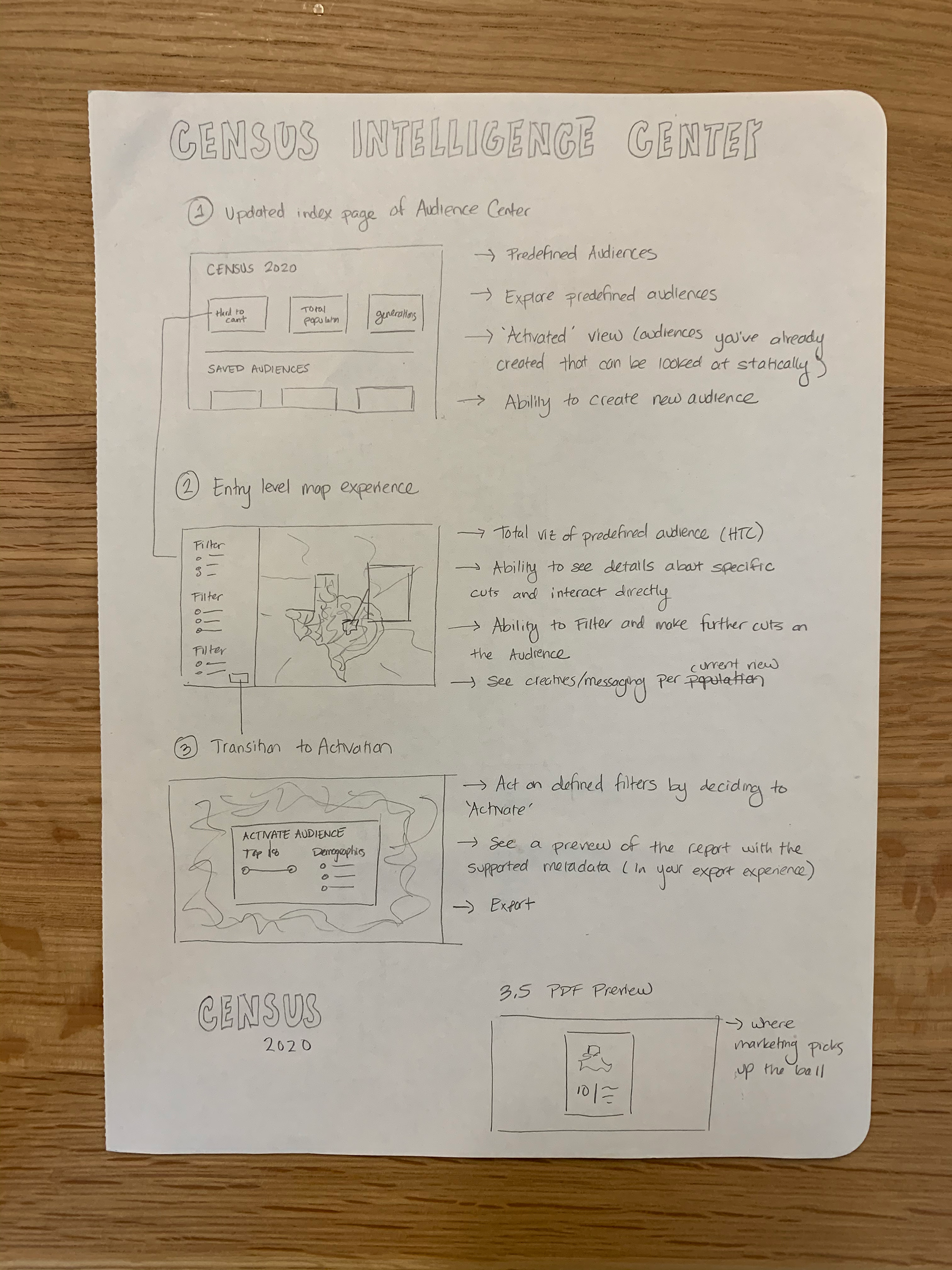 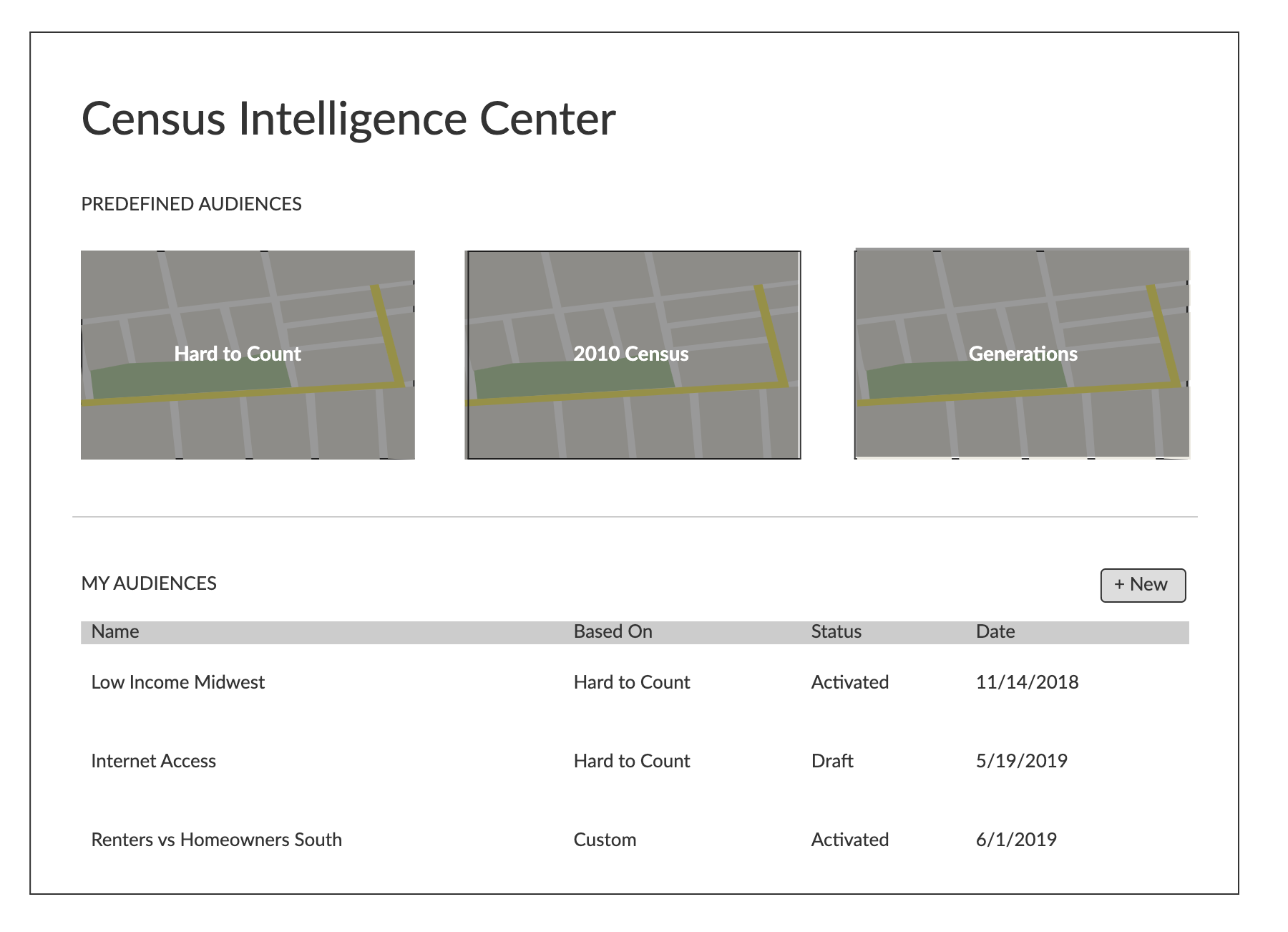 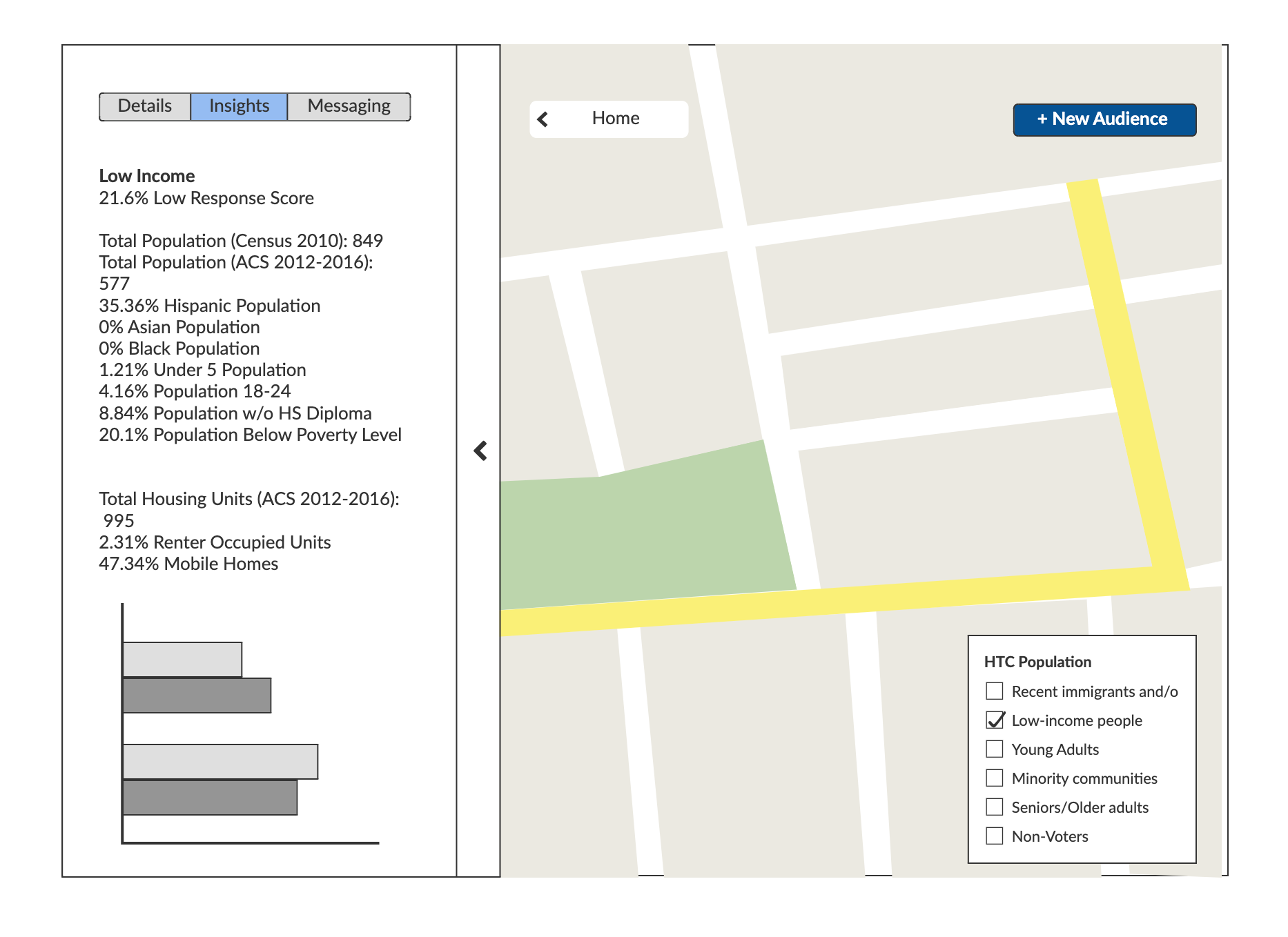 Part 1: Discovery
Summary of insights derived from user research
The Census is one of the most complex and critical operational challenges of each decade; to execute it involves the mobilization and allocation of resources at a speed and magnitude similar to elections and wartime. Ensuring a complete count is as important as it is difficult. Results of the Census are used for political reapportionment and redistricting, federal funding distribution of more than 1 trillion dollars, business decisions, and much more.
Ahead of the 2020 Census and due to heightened concerns about accuracy and participation, even before the added complications of COVID-19, local governments and advocacy organizations across the country developed strategies and outreach efforts to maximize counts in their localities, particularly amongst populations deemed hard-to-count by the United States Census Bureau.
While the Census is undoubtedly a Big Data project, in regards to its execution, data-driven decisions on a local level are not a guarantee. In government and advocacy spaces, the natural pioneer of a data-driven approach, the data scientist, is often outnumbered one-to-many by analysts, policymakers, and outreach coordinators. Their small numbers, in combination with bureaucracy, silos, and their limited ability to directly act on their findings, perpetuates two primary challenges among them:
1. Delivery: the attempt to get data into the hands of those with the power to affect change, at the right time (Ex: delivering a model of the hardest to count Census tracts in a state based on metrics such as the tract's poverty level, access to internet, and the percent of its population that does not speak English to the organizer running a door-to-door messaging campaign in that Census tract)
2. Interpretation: ensuring accuracy in the conclusions drawn by data that is delivered
(Ex: Census tracts are hard to count for different reasons. One tract might have average access to internet, but fewer English speakers, suggesting the need for bilingual online messaging. Another tract may be mostly English speaking with low internet penetration, signaling the value of an outreach event for folks to fill out the Census at a local library.)
Data scientists have the numbers, but not necessarily the context. Analysts, campaign managers, and outreach coordinators have the context but need to understand the numbers.
The minimally viable version (MVP) of Audience Center was a simple list cutting tool focused on the activation workflow for CPG (consumer packaged goods) brands. Activation, in user speak, means: "Show me people in my customer base with x, y, z attributes and a, b, c behaviors and tell me who they are so I can go talk to them."
Customers using the MVP went through a linear process of defining audiences, visualizing results, and activating by pushing lists of people to external applications like Facebook. 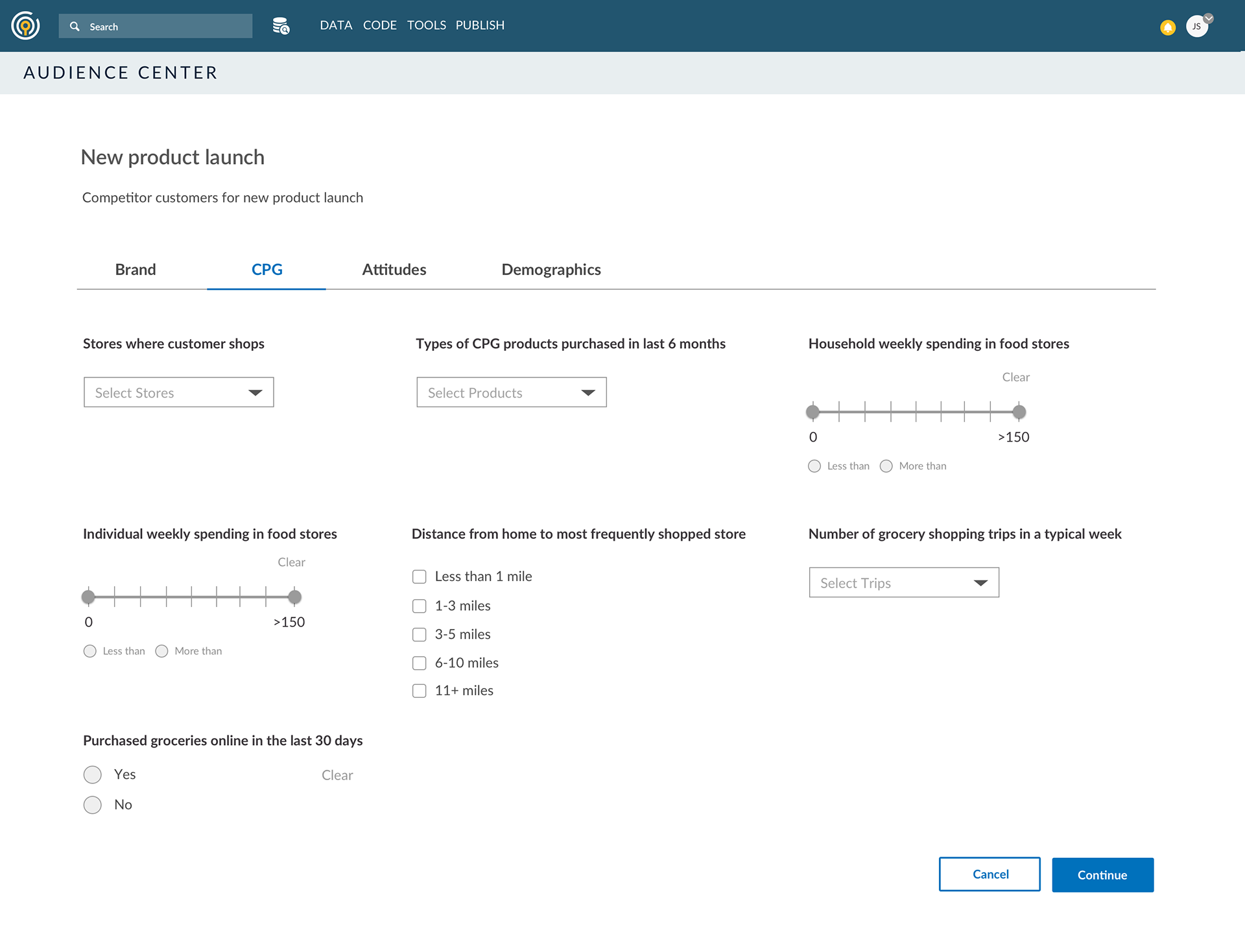 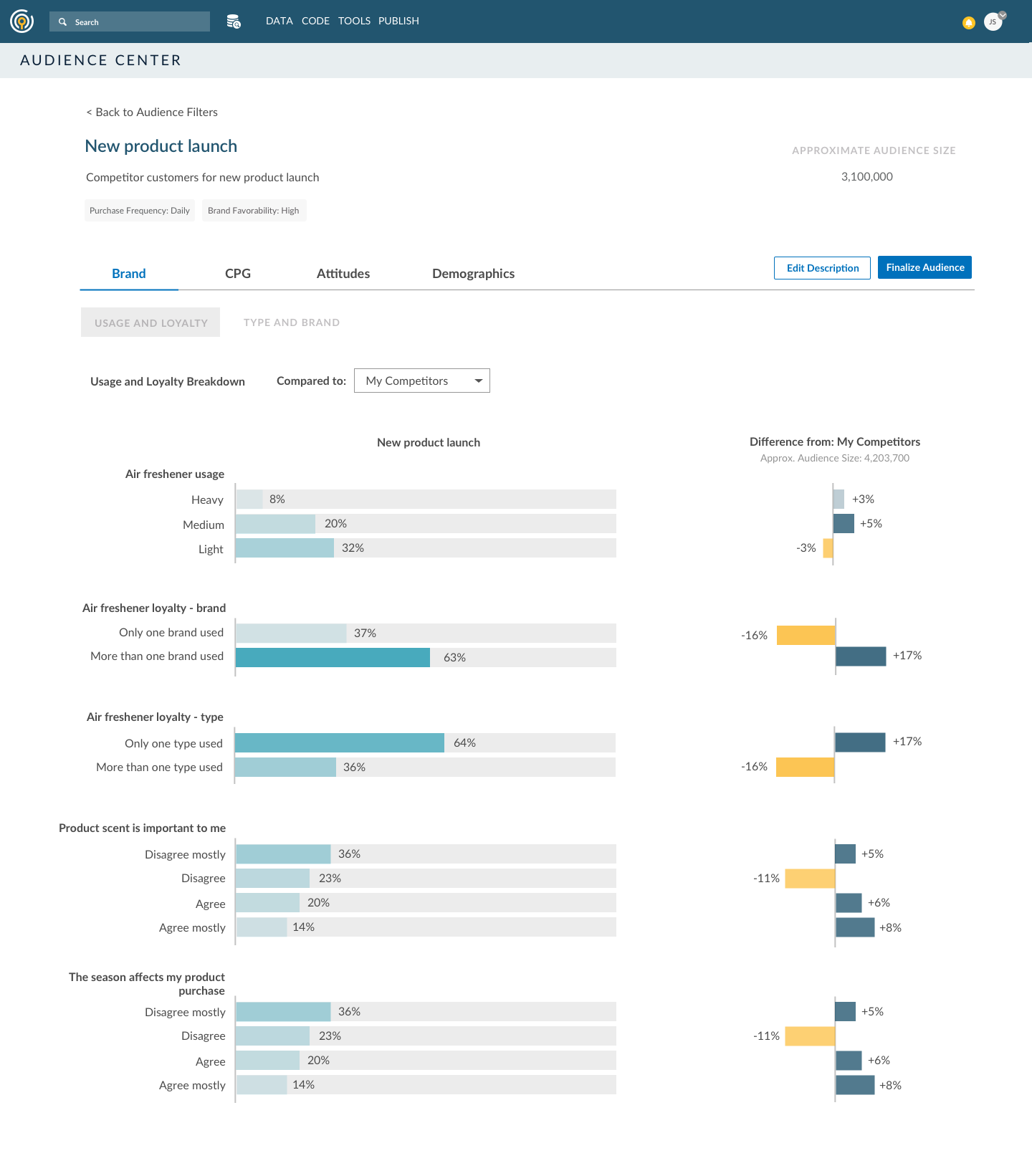 Designs above were done by Audience Center's previous designer, Chelsea
Feedback on the MVP aligned primarily around the idea that users wanted the application to be more exploratory; it was difficult for users to gain insight into their customer bases when definition had to come before visualization. For Census users, a visualization first workflow was of the utmost importance.
Part 2: Synthesis 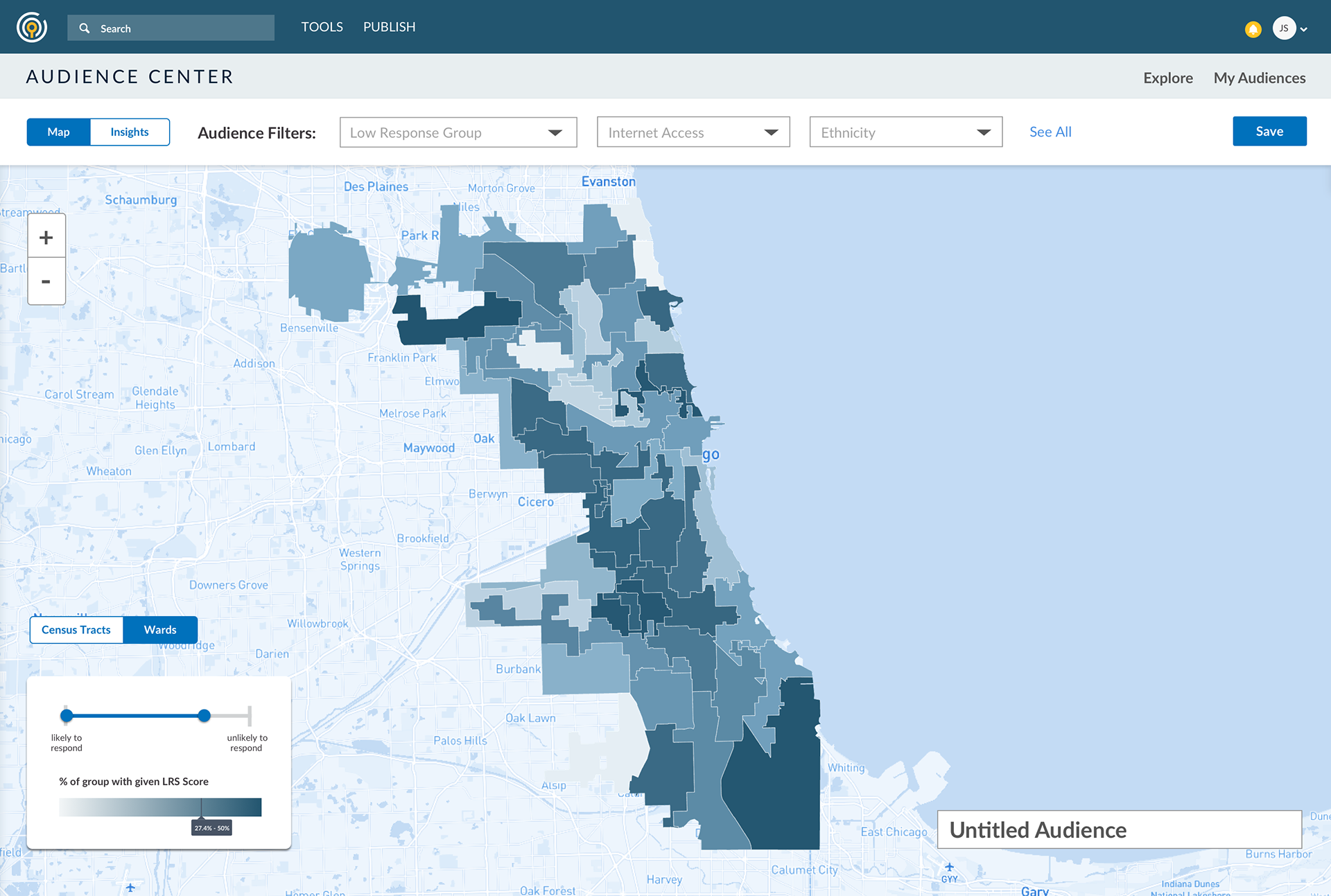 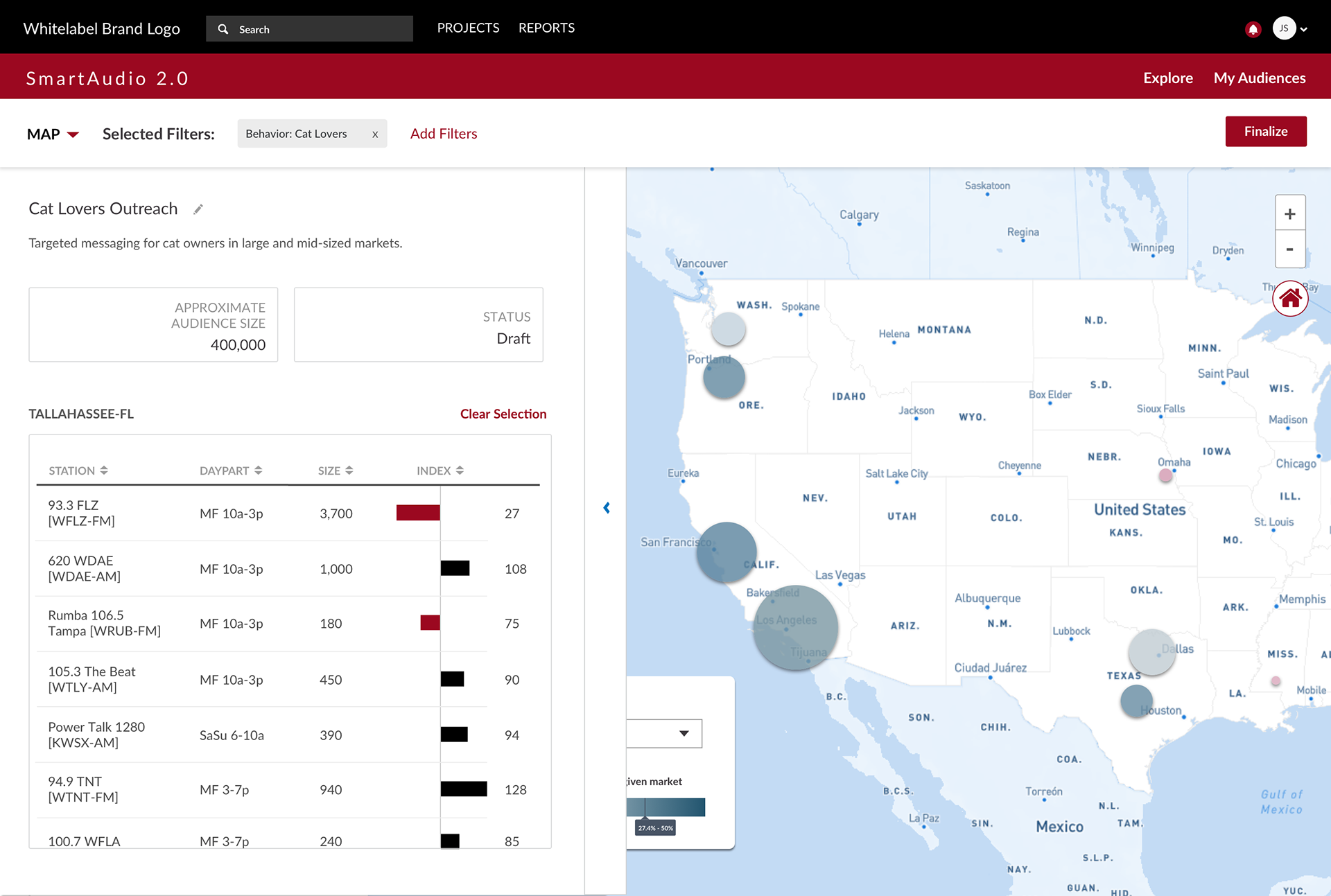 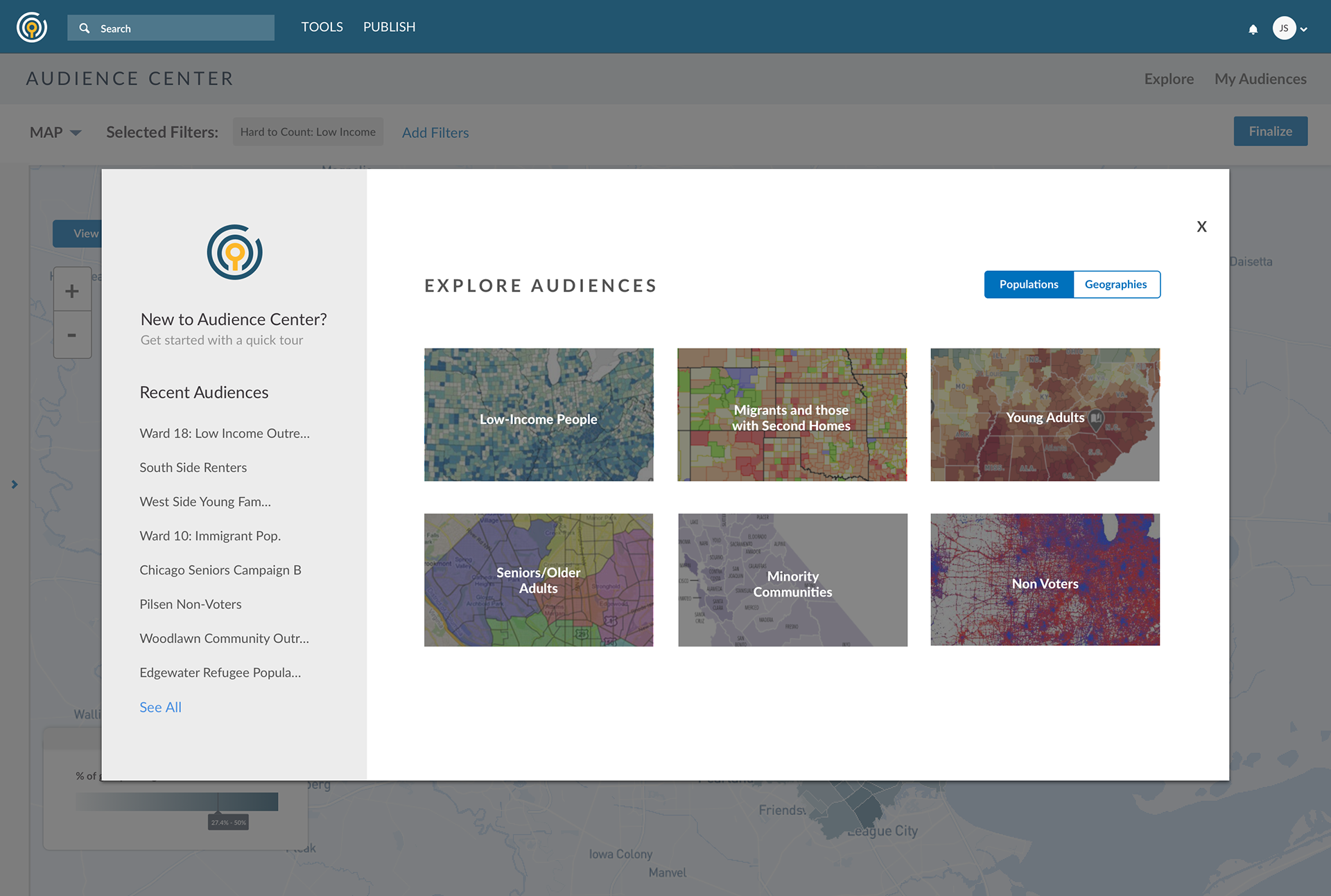 Medium fidelity mockups used primarily to drive conversations with stakeholders. Feedback around each of these pieces of the app drove final designs. From left: v1 of ward map had too many conflicting controls, mock for commercial client conflated two types of data viz, near final version of index sat on top of map viz as modal
In designing the second version of Audience Center, I derived a lot of insight from internal Civis folks with subject matter expertise, those who work with government clients, and from direct conversations with people working on Census efforts, including city Alderman, chief data officers, and outreach coordinators.
Whether the goal is to get a political candidate elected, increase product sales, or encourage people to fill out the Census, most campaigns have four primary components:
1. Planning - understanding a place and its population using all available data
2. Organizing - prioritizing resourcing where it's needed most
3. Messaging - identifying the most persuasive things to say for a given population
4. Reporting - evaluating the effectiveness of campaign efforts
The underlying design paradigm of Audience Center today is that it enables users to work iteratively through these four phases with a circular workflow that creates a measurable feedback loop. For example:
A data scientist working in Harris County Texas can combine data sets and deliver models through CIC so that an outreach coordinator at a complete count committee can determine highest priority Census tracts and develop messaging. An organizer on the ground in Houston uses a list of tracts or neighborhoods to plan events, get out the count door to door, or make phone calls. Nightly, the Census Bureau delivers data on response rates, which are fed back into CIC to help all parties determine if their strategies are working. 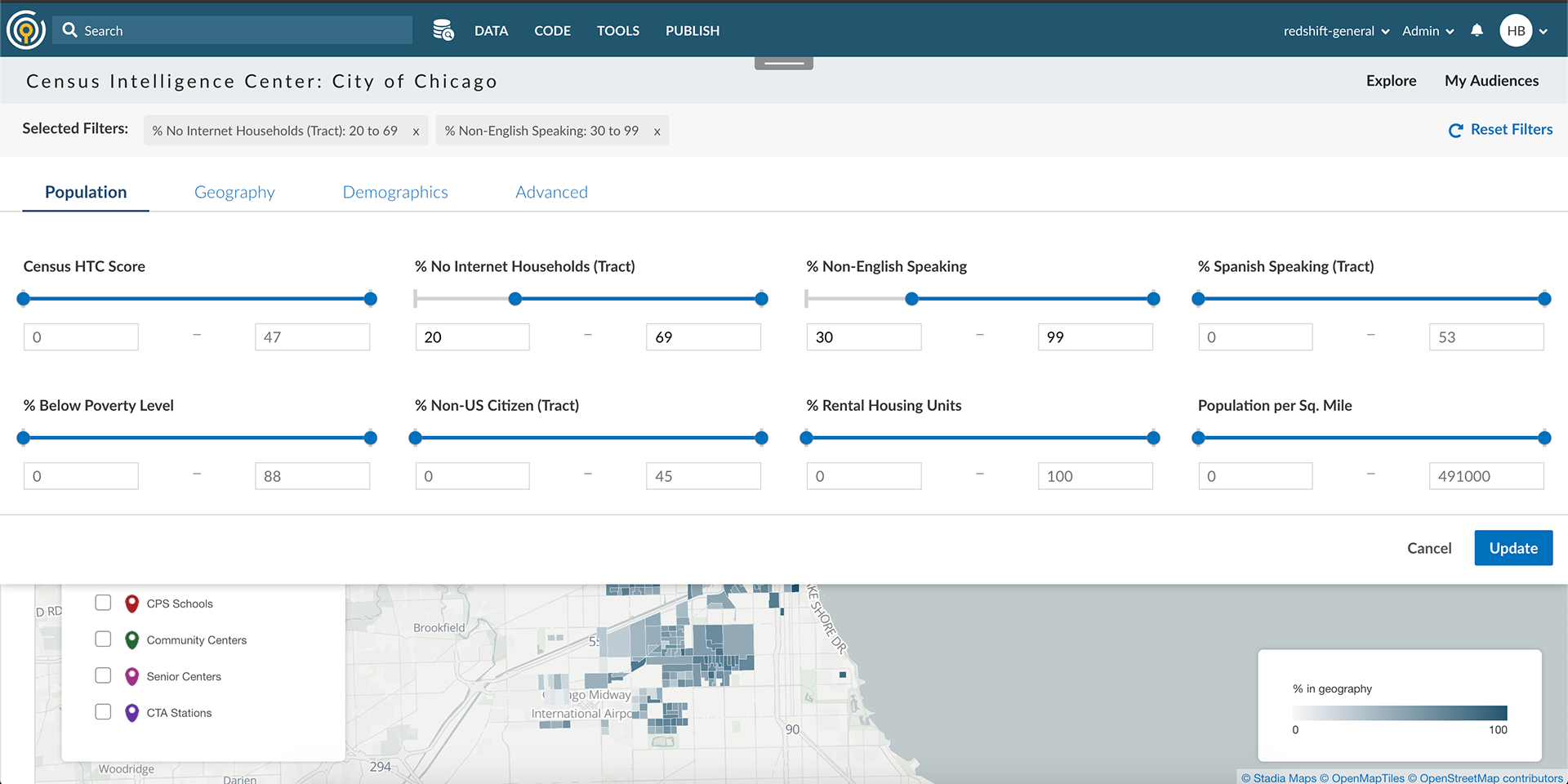 Screenshots from CIC in production. Top: a GIF showing the basic workflow to filter a population down to a particular audience — unlike the previous version, users can now filter and see their changes reflected immediately. Bottom left: the full filter drawer can feature all kinds of components (drop-downs, checkboxes, etc.) and categories, configurable per client. Bottom right: an audience filtered down to a collection of geographies.
Part 3: Beyond Census
Audience Center was designed and built to support all kinds of campaigns. Once the Census is over, organizations using the tool can pivot to other kinds of outreach; some are already using it for COVID-19 response.
At the end of the day, there are many ways to make a dashboard, to aggregate data and present charts and graphics to inspire a feeling that science is driving decision making within an organization. But many dashboards are simply not actionable, they present information without context and leave it to end users to determine meaning and direction. Particularly in organizations facing scary and sometimes intractable problems surrounding things like poverty and disease, running the numbers is simply not enough. In addition to data, solving big problems involves careful planning, depth of understanding, and above all, organization.
The design for Audience Center was and continues to be motivated by the complexity of organizational challenges like the Census or Get out the Vote. As it continues to evolve, it must balance the urgency and unpredictability that is so central to the work lives of its users with the stability and minimalism required to create data driven experiences that cut through the noise.
↑Back to Top